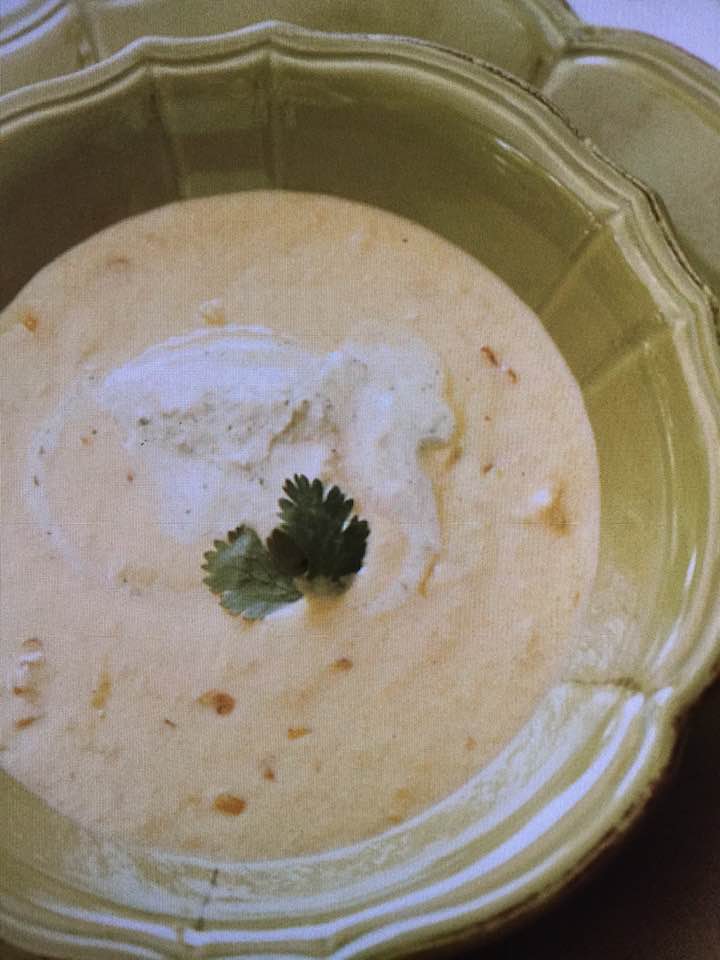 1. Set a box grater in a wide, shallow bowl and coarsely grate 6 ears of corn (about 2 c.) and then cut the kernels off the 4 ears of corn (about 2 c.).
2. In large saucepan, heat 1 T. olive oil.
3. Add bacon, celery, onion, and bell pepper. Cover and cook over low heat, stirring a few times, until softened.
4. Add grated corn, milk and 1 c. heavy cream. Bring to boil.
5. Reduce heat to low and simmer, stirring often, until soup is thickened, about 15-20 minutes.
6. Season with salt and red pepper. Keep warm.
7. In a large skillet, heat 2 T. olive oil until shimmering.
8. Add the corn kernels and cook over moderate heat, stirring a few times until lightly browned.
9. Season with salt. Stir into the soup mixture and keep warm.
10. In blender, whip the remaining ½ c. of heavy cream to soft peaks. Add sour cream, jalapeno, chopped cilantro and lemon juice and blend until thick.
11. Season with salt and white pepper.
12. Ladle soup into bowls, top with spoonfuls of jalapeno cream and cilantro leaves.

1. If roast is not seasoned and stuffed, do so with salt, red/black pepper, garlic…

Copyright © 2018 - Geaux Ask Alice. All rights reserved.
Back To Top
×
We use cookies to ensure that we give you the best experience on our website. If you continue to use this site we will assume that you are happy with it.Accept